This blog has been published as column in a Dutch construction related newspaper (Cobouw) . See here to read it in dutch.

About 20 years ago, it was still business as usual. But then, in the nineties, the music industry is shaken, when Napster puts things upside down : sharing and downloading music via the web. The music industry nearly went broke, and is still trying to recover from it. A few years ago I spoke to the manager of a popular Dutch music band, and he summarized the changes as follows: before, we were doing concerts to promote selling CD’s. Now we sell CD’s ( and downloads) to help promote concerts. The business model changed 180 degrees.

.
Some years later the video industry was overturned. They could have seen this coming, when they had studied the music industry. But they did not. And currently taxidriving, hotels, newspapers, air travel, and banks face major changes: The old model does not work anymore, and new business models are popping up everywhere, accelerated by the crises we had passed years. And that’s not all, now even the food industry is reorganized by the digital opportunities: biofood, delivery at home, sharing food, dinners at private homes are all on offer, and more. The sector changes drastically .And you thought that the building sector could hide from this ? That it would remain outside firing range? No way, the building sector will be “re-shoveled” as well. 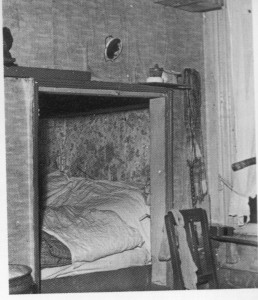 .
In fact, the change in the building sector started already long time a go, and could even be regarded as the first sector to be overturned “ävant la lettre”, slowly but steadily: 100 years ago, the bedstead was part of the built structure , it became commercial commodity , abstracted from the house. Next the cellar disappeared, same story, hijacked by the commercial industry it became a refrigerator. Built-in cupboards disappeared, and Ikea and the likes took over. Slowly the house was dismantled, split and sold in parts . Kitchens followed, and today we already buy dormer window boxes online, installed one week later in one day.

.
Now we see the next move: In The Netherlands we have programmes called ‘energiesprong’ (Energy Jump) and ‘stroomversnelling’, that develop 1 day renovations of row houses (!), for 0-energy performance. Many pilots have been done and up scaling has started, based on prefab production of façade and roof elements. With building ( retrofit ) license in 1 day. And with 25 years guarantee.[1] Its façade and roofs now becoming a commodity. It wont take long or your house refurbishment can be ordered online: only decide for the façade color, and in 2 weeks your house gets a make over in 1 day. Its still expensive, today. True. But that’s only since work is carried out from within the old structures. How can it be that 6 prefab elements (two front to rear faced, 2 roof) from wood with some insulation, cost 10.000 euro each? And with only three men required to install them? That’s the price of 6 times a small car… One of the clients in the pilot-programme sighed: the main problem is that the construction firm is still in between parties…. 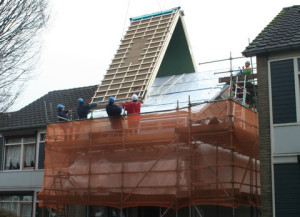 Nevertheless, its just starting. This is only the prelude for real change. It won’t stop here.  Compare this with “white goods” in the Netherlands: we have a “take back obligation” by the producer, so how long will it take before we do have that for prefab façade elements? But even then , why would you like to own these elements anyway? With complicated guarantee arrangements? The sharing economy is coming, we will only lend or lease these elements and leave responsibility over the lifetime with the supplier. So you don’t need to give them back, you just order another one if the old one gets boring. I can see it before me: a lively trade in second hand prefab façade elements. Just a little paint and someone can use them for years.

But then, you still own the load carrying structure, and maybe the land beneath? Why should you? Its unlikely in the future: you will lease that as well. You only “stay “in the house. And then housing connects to the general trend: lease as you please, like airbnb for house, without the breakfast. At least you will order that via another app. It becomes very flexible: stay 1 year here, and another year there, depending on the job, at bicycle distance, or in the desired climate while working on distance.

.
Architect, contractors, they have lived their lives. The architect, will become a industrial designer, And the contractor? If he is fast enough to pick up the new developments , he might take another role. : project manager: the one that buys houses, arranges a make over ( mandatory for 0-energy or better) , and next rents them out via a kind of airbnb . (without breakfast, which we will arrange via another app). In 20 or 30 years we will consume houses, not own houses anymore*.

.
* Everything under reservation, and as long as stocks last ( You know, of supposed ” unlimited energy and resources”)

for every new so called greenbuilding in the developed world , there is an empty building somewhere...