The problem with political agreements like the Paris climate agreement is that nobody really has a clue what this will imply. What are we talking about? Change for a renewable energy supply system? Yes, but even then, what does this imply?

The most honest way to approach the issue of reducing CO2 impacts is to say that you and I can limit our impact , Which in the end is unavoidable. But in how to do that we are fooled all the time: Take tourism. Travelling is very impact-rich, but then there is ecotourism. Ecotourism? Flying to a eco-lodge? At most you can reduce your impact from tourism a little. Unless you don’t travel anymore.

With the focus on CO2 emission, it still is a end of pipe approach . It does not solve anything, it only limits one of the negative impacts from our behaviour. Better would be to focus on resource and energy consumption, to include depletion of resources as well. However, at the same time , when we accept the common agreement to focus on CO2 emissions, at least it provides us a clue to clarify the consequences of the Paris agreement, since with CO2 emissions its possible to calculate. Not in generic terms, like global averages etc, but in a personal way: there is a budget!

The 2 degree limit set in Paris , implies that there is a maximum limit to what still can be released as CO2 emission, before we cross that line. And that budget has been calculated as 1,200 gigatonnes CO2. ( from the black dot to the dark blue IPCC scenario, synthesis report 2014 fig.SPM5b ) That’s the maximum CO2 to be emitted to have a chance of at least 66% to stay below the 2 degrees [1]. Now its easy to see that with 7 billion people , it comes down globally to 171 ton for each individual . 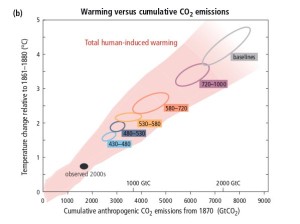 Suppose we spread this, over a similar period as is mentioned in many studies, that by 2050 we should have 0-emissions. That leaves each of us with a budget of 4,9 , say 5 tonnes per year. To be invested wisely, since after 2050 its over, the budget is exhausted.

To put his in perspective,currently ,in The Netherlands a person on average emits 10,5 tonnes a year in the atmosphere: say 10 tonnes. So on a personal level it comes down to cut our emissions with 50 % . Now , immediately. If we still consume 10 tonnes in 2016 , it becomes less then 5 the years after! Now thats the consequence of Paris, of staying below 2 degrees! .

5 tonnes to reduce next year, where do you cut ? On average a Dutch person emits 2,5 tonnes for transport, 2,5 tonnes for food, 1,9 tonnes for home energy, 0,8 for clothing, 1,5 home decoration, and 1,1 for recreation. Forget home decoration and recreation (or DIY, with waste materials and walking in the park) , gives 2,6 tonnes avoided, leaves you with another 2,4 tonnes to reduce somewhere. Think of no more meat, more bicycling, extend lifetime of clothing. And skip the the holiday flight: skip 1500 km up and down flying and save 0,5 tonnes.

This is the direct consequence of the choices made in Paris. Its not some distant target, that politics has to work out. It is directly related to what you and I do, how we live our lives.

Now suppose you and I can come down to 5 tonnes a year, that would be a major achievement. But not enough… since :

1 we will have to build a renewable energy supply system, based on hydropower, wind and solar. This will require a massive amount of materials , for which we have to invest a (fossil) energy budget to produce these. Part of your budget has to be reserved for that from your account. Since after 2050 we cant emit anything anymore…!

2 In the mean time, population is growing, to 9 or 9,5 billion, and to distribute the CO2 budget equally, decreases the budget per capita.

3 So far the major part of the already emitted CO2, responsible for climate change, is invested in the industrialized world. We can still profit for hundreds of years of the infrastructure, buildings and greenhouses constructed with that. It would be fair to give more budget to still under developed countries, to improve their circumstances to a acceptable level , with investments in some decent houses , infrastructure and food production. Which will further reduce the budget of people in the industrialized world.

4 So far we only discussed CO2 emissions, . But other emissions contribute to climate change as well. We should have limits there also. [2]

5 This is all calculated for 2 degrees. But Paris agreed already to make efforts to get to a maximum of 1,5 degree. Its not difficult to see that this will reduce the budget even further (though nearly impossible already)

Therefore Paris , that is: the knowledge from science accepted by Paris, has immense consequences, directly for you and me. Waiting for governments to develop policies and measures, followed by waiting for society and industry to implement this, while you are spending your budget as always, is way too late.

What is needed is what has long been predicted: a factor 10 improvement in our resource efficiency, or even factor 20 , as was proposed already in the nineties. (By the way: factor 10 or 20 can also imply reduction (“not using“ ), not only efficiency.)

Maybe there is only one way to act fast: handle this like the government deals with financial budgets each year: allocate the CO2 budget to citizens, just like they earn money and pay income tax. On one side people decide themselves how to spent their budget, and see how fast they/we can change when responsible: What then would you choose, suppose tomorrow you had only 5 tonnes CO2 a year? And less and less the next years? And of course part of your emission budget is taxed , to build wind turbine parks for instance.

This is the real consequence of the climate situation and the Paris agreement. You can hide all this by announcing industry policies and energy transitions, even wait for geo-engineering and CO2 storage to develop. But its not about some distant policy or technology development, Its about serious reduction, here and now. We should be honest about this. Be clear about the budget, and act on that. Collectively, of course.

Only when current energy-money-food institutions go from “ too big to fail” to “ too big to save”, will we have collapse and change …